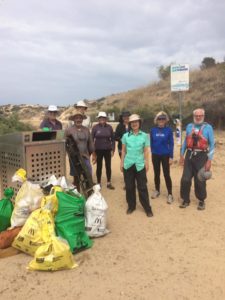 South Australia’s paddlers were out in force on Sunday 1st March for the annual Clean Up Australia Day.
Adelaide Canoe Club have made this an annual club paddling event for several years, and the tracking photos taken each year would certainly suggest their work is making a big impact – the piles of rubbish collected from the Onkaparinga River south of Adelaide have definitely decreased compared to the early paddles!
SA were also inspired to take part, offering another paddle/Clean Up event further down the Onkaparinga River at Perry’s Bend.  This paddle had more of a family theme, with several Under 7’s involved on a variety of craft ranging from in the doubles with Mum or Dad, on Sit on Tops, and even in a small child-sized Prion sea kayak! The water-borne PSA crew were joined on land by at least two other Clean Up groups, and so everyone was keenly scouring the area for any bit of rubbish to contribute to their team’s haul.  Will be this event be the next ‘big thing’ in competitive sports we wonder?  However all teams ‘competed’ in good spirit and co-operation – the OzFish guys had a motorised punt on the water so they took on the job of large furniture item recovery that the on-water kid’s team would locate; and the retiree group on land kindly donated their excess BBQ sausages to the cause to keep the kids (and adults) re-fuelled.
We will reflect on the learnings from this year’s event – for the young kids it was a tricky ask learning to jump ashore from a kayak onto the steep river bank – soon learning that stepping on to land with one leg only means the other leg will stay on the kayak which will push away and put the occupant in the water. We also watched with some amusement as they attempted to pick up cans and bottles with over-size gardening gloves on their hands – as they would bend over to pick one can up, several previously-collected items would then tumble out of the top of their rubbish sack. Turn around – spot this new pile of rubbish – bend down to pick it up – another new pile drops out of the sack – and so it went on, but the technique was quickly refined and by the end we can confirm more rubbish was picked up than was dropped! 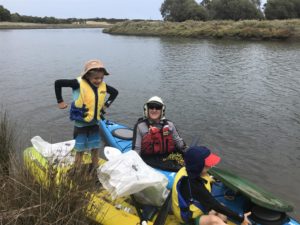 Both the Adelaide Canoe Club and Paddle SA crews met at the regular bakery in Port Noarlunga afterward for a hard-earned coffee/sausage roll/ice cream – and that was just the adults!    We will no doubt repeat this enjoyable event next year. Thanks to Kim Wooning for organising this event each year and to Peter Carter for managing the on-water paddling safety.
Ian Brunning
President – Adelaide Canoe Club