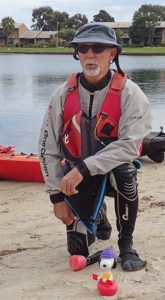 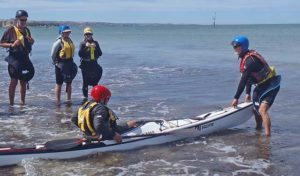 In the late 1980s and early 1990s David Mausolf was an active participant in Canoe Polo and was working toward Instructor qualification in other areas of paddling, on both inland waters and the sea, becoming an Instructor on both Whitewater and Sea, and in canoe and kayak.
For many years, David was a member of the committee of Adelaide Canoe Club (ACC), planning and leading events. These included half day, day and extended trips to a wide variety of waters: Murray backwaters, the Coorong, Glenelg River, Onkaparinga River, Coffin Bay, Goulburn River, Gippsland Rivers, Katherine River, Whitsunday Islands…
In 2005 he was elected Vice-President of the club, then a new position. On the retirement of David Mallett, he was elected President in 2009, a position he held until his own retirement in 2017.
As an Instructor and Assessor, David was active with the Education and Safety Technical Committee. Within ACC, he initiated regular training sessions, including the Tuesday evening sessions on West Lakes for members and prospective members. His own commitment to gaining and maintaining his qualifications enabled him to expand the opportunities for members to take part in these types of activities.
Always great company, David operated with a sense of good humour and inclusion to all participants that he guided.
He always encouraged members to train for PAQS leadership awards so that new leadership was always developing for club events. As incentive, David began the reimbursement scheme for the training and registration of new leaders.
David was always interested in paddling as part of community affairs: as example, he began the club’s involvement in the annual Clean up Australia Day, with members scouring the banks of the lower Onkaparinga. Another event was the annual Team Paddle Challenge.
In 2016 David received the Award for Outstanding Service from the Outdoor Educators’ Association of SA in recognition of his work in Outdoor Education through paddling, and in 2017 was awarded Life Membership of Paddle SA in recognition of his efforts in promoting paddle exploration and education in this state.